We present 4 routes adapted for people with Reduced Mobility

By Walk In Granada
Blog-english

We present 4 Accesibles routes
for people with motor disabilities

Granada accessible to everyone! 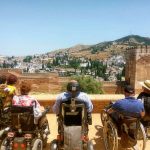 This year we are premiere! In Walk In Granada Tour we celebrate the inclusion of 4 new tourist routes that are accessible for people with motor disabilities in the city of Granada. We tell you how we have managed to take this project forward.

Last November, the City Council of Granada, together with the University of Granada and Tourism of the City, organized the I Encuentro LabIN Granada on tourism and city. The objective of the same promotes the citizen participation encouraging to present new ideas on Sustainable Tourism. Finally, some of these ideas to complete the strategic lines of the Tourism Plan of the City. Among these ideas one of Walk In Granada Tours in collaboration with the association Accessible City and the Taxi Union. We are very happy because these new routes will certainly improve the affordable offer in Granada.

For the design of these historical and cultural itineraries, the information provided by the Provincial Council of Granada, the City Council of Granada and the Board of the Alhambra has been used. Thanks to all of them.

The final proposal consisted of 4 itineraries that cover the areas of the Historic District, the Albaicín and the Alhambra Palace. These adapted routes have been tested by volunteers with motor disabilities to verify their degree of accessibility. Everyone confirmed their complete satisfaction in this pilot experience!

The visits are made by our official guides, all of them trained and experienced working with people with motor disabilities. Accessible City will have the role of supervising entity of these routes and guarantee the degree of real accessibility that they have and the type of users with disabilities that can carry them out. Likewise, it will be in charge of assessing the quality of the training of the guides involved in this project.

The Taxi Association also makes an excellent contribution to the offer of Accessible Tourism in Granada by offering adapted vehicles with priority rights and fixed prices. In addition, these adapted taxis can perform the connection and transfer service in the procedures of the City of Granada that are not viable for people with motor disabilities. These urban standard itineraries are adapted to a fixed price so that the delivery and handling times of the wheelchairs for their placement in the vehicle do not interfere with said rate.